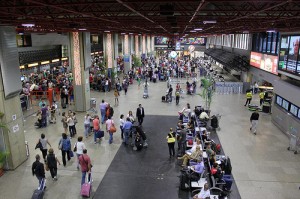 The largest country in South America, Brazil, is kind of hard to explore without resorting to domestic flights. And many travelers arrive here by plane, as well, although there are buses connecting Brazil to the rest of South American countries.

Famous for its football (soccer for the North Americans), Carnival, Amazon with its rain forest, Iguacu Falls and vibrant nightlife, Brazil is a country which easily gets under your skin and you fall in love with it.

Most important airports in Brazil

Brasília–Presidente Juscelino Kubitschek International Airport (BSB) serves the capital of Brasilia and is an important airport in the country (3rd busiest by passenger traffic in 2011). It is not hub for any airline , but handles flights to/from North America (Miami, Atlanta), South America, Central America, Europe (Lisbon), as well as domestic flights.