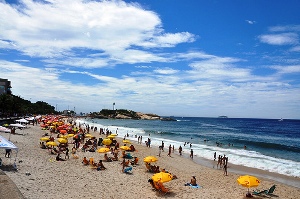 With all the hype around the upcoming football tournament in South Africa, many have forgotten that World Cup 2014 will take place in Brazil. It will be the 20th World Cup and would be held in South America for the first time since Argentina hosted the tournament in 1978.

The 2010 edition hasn’t even started yet and it’s premature to start planning the vacation during the tournament in Brazil, but you can surely plan a vacation in Brazil to get a taste of what the country feels like and what to expect.

Airfare to Brasilia is not very hard to find but you do need to plan in advance in order to get some good deals. For example, a round trip flight from New York starts at $788 (on TAM Linhas Aereas) and if you fly from London expect to pay at least $1026 (on TAP Portugal) for a round trip flight.

Since the airfare will definitely make up the bulk of the expenses, you’ll be please to know that hotels in Brazil won’t burn a whole in your pocket. If you choose to stay in the capital of Brasilia, you can find rooms starting at $75 per night.

No trip to Brazil is complete without visiting Rio de Janeiro. A one way flight from Brasilia into Rio starts at $92 (on Gol Linhas Aereas) if you book ahead of time. And although the city is more expensive than the capital, you can find hotel rooms starting at $79 per night, in a hotel located close to the Copacabana beach.

Trying the local cuisine, dancing the night away and soaking up the sun are just some of the things you need to experience while you visit the country. And if you plan your vacation during the football season, don’t miss watching a game on Maracanã, one of the largest football stadiums in the world.