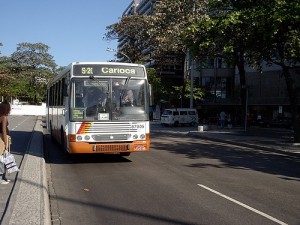 Although flying is the fastest way to get around such a large country as Brazil, booking a domestic flight is not exactly a cheap affair.

If you are on a tight budget then choosing bus travel in Brazil is the way to go. Locals love the bus system so you’ll also get to soak up the real Brazilian culture.

Generally, bus travel in Brazil is efficient and cheap. While the buses are in excellent shape, the roads aren’t. So be prepared for perpetual traffic jams and delays.

Getting to/from Brazil by Bus – From Another Country

The cheapest way to get to Brazil from other Southern American countries is by bys. Long-distance buses serve the country and offer direct connections to the following capitals: Buenos Aires, Asunción, Montevideo, Santiago de Chile, and Lima.

Do remember that distances between the above mentioned capitals and Sao Paulo are significant so road travel can take up to 3 days, depending on where you are coming from.

Getting around Brazil by Bus – From One City to Another

Catching a bus to travel between the cities in Brazil is easy. You don’t need to book in advance either. Simply show up at the bus station, check the timetable, get a ticket and hop on the next bus to the desired destination.

Getting around Brazil by Bus – Within a City

Many cities in Brazil have good bus network, which provide cheapest way to travel within the city (although it’s not the fastest way).

In Sao Paulo, buses are the most popular type of transportation among locals. Considering the state of the roads, they are not the fastest way to get around though. Fares are R$3,00 one way.

In Rio de Janeiro, buses remain the cheapest and easiest way to get around the South Zone. Fares are R$2,35 one way. The most popular lines for tourists are 583 and 584 (from Copacabana and Ipanema to Corcovado railway station), as well as 464 and 435 (from Copacabana to Maracanã).

In Brasilia, the buses stop only if they are flagged. Fares are R$2,00 one way. They connect the city center with the residential zones, aside from offering connections within the city center.