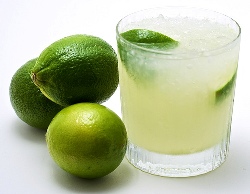 Cachaca is the most popular alcoholic drink in Brazil. It’s the product of the distillation of sugarcane. Its alcohol strength varies between 38% and 48% in volumes.

Traditional, the fermentation agent used is maze flour. The distillation takes place in a copper pot still. Then the drink is either bottled or stored in wooden barrels. The industrial production is done in common stills and some impurities might remain in the drink.

In Northeast Brazil it’s a common practice to drink cachaca with a dollop of honey and a bit of lime juice.

Cachaca is often used in cocktails. The most famous of them is caipirinha, which is considered the national drink of Brazil. Making caipirinha is really easy. You only need cachaca, lime, sugar and ice.

To make caipirinha put the lime into an old fashioned glass, add the sugar and muddle. Fill the glass with ice and add the cachaca.

Lately many youngsters prefer a variant of the cocktail which is not even using cachaca but vodka and is called caipivodka.

Another cocktail based on cachaca is called “capeta” or in translation “devil”. It’s made with condensed milk, cinnamon, guarana powder, some other ingredients which vary by region and of course, cachaca.