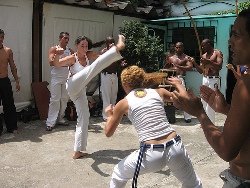 A blend of martial arts, music, dance and game, capoeira is the most well known form of martial arts performed in Brazil. It has been brought to Brazil by African slaves and comprises vivacious movements accompanied by music. Capoeira performances can be seen on the street in Brazilian cities.

Capoeira originated in Brazil in the regions of Bahia, Pernambuco, Rio de Janeiro, Minas Gerais and São Paulo. It has been developed in the 16th century, by both the native Indian slaves and the African slaves brought to the country.

Participants form a circle (called “roda”) and each person takes turn to play an instrument, sing, and “fight” in the middle of the circle. The game contains acrobatic movements and a lot of groundwork.

Usually the roda is a circle of about 3 m/10 ft in diameter. Obviously, circles can be larger or smaller depending on the number of participants. The game rarely involves contact but the danger of getting hurt is always present.

The modern forms of capoeira are often citizens by the traditionalists who believe that the game is losing its playfulness.

The music sets the tempo and style of the game and is an integrated part of it. The music comprises both instruments and songs. The tempo ranges from very slow to very fast. Most of the songs are sang in the “call and response” format. The subjects are varied.

There are three basic songs played in capoeira:

The instruments used are aligned in a bateria. There are three bows which lead the rhythm, two pandeiros (tambourines), a reco-reco (rasp) and an agogo (double gong bell). The atabaque (conga drum) is considered optional although it’s common in most performances.

The two styles are traditional and modern. The oldest form is Angola, the traditional one, considered the mother of all capoeira forms.

You don’t have to visit Brazil to learn capoeira. There are schools pretty much all over the world. Here’s a list of capoeira schools in the world.