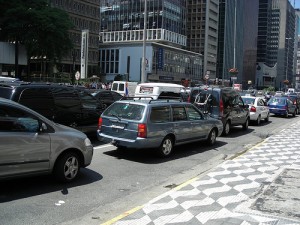 Driving in Brazil is not exactly for everyone. While it’s safer to drive in some towns, traffic in Brazil is, typically undisciplined and definitely challenges drivers. Getting around Brazil doesn’t necessarily require a car, but there are situations when a rental car is the best choice to get to remote places.

Since March 2010, driving in Brazil has been made simpler for international travelers. You need your valid, original driver’s license and your passport in order to drive legally in Brazil. To drive in Brazil you should be at least 18 years old but to rent a car you need to be at least 25 years old.

Finding the right rental car in Brazil can be quite challenging. However, many companies provide pricing and booking online, so you can get an idea before arriving. Before choosing a car, it’s a good idea to know where you’ll be going and what sites you’ll be visiting. You’ll have at least a bulk estimate of the time you need the car for. Then you can look for drop off/pick up places in Brazil and also for types of cars.

Although it tends to be quite expensive to rent a car for a long period of time, if you only need it for a week or so, it is affordable and offers endless opportunities to explore the country at your own pace.

In large cities prices are the same but might vary from a car rental company to another. So, if you rent a compact car in Brasilia, Rio de Janeiro or Sao Paulo, the prices start at around $45 per day, full insurance and theft protection included.

Some of the rental cars in Brazil include:

It is generally accepted that unless you know what you are doing, it’s better not to drive in Brazil. The standard of driving is far from what you are used to in the US or Europe and the roads aren’t exactly in the best condition either.

The two main problems of roads in Brazil are: potholes and animals. So avoid driving at night. Flashing headlights from the incoming car means caution on the road ahead (most of the time , it means: cops, animals or speed radar).

Keep the doors locked when you drive, especially in large towns as robberies tend to happen at stop signs and red lights. Since your car is locked, it’s much harder to be robbed. Also, even if you don’t have AC in the rental car, keep the windows rolled up.

Particularly in Sao Paulo, motorcycle riders can be quite daring. They often make their way between lanes, making the traffic draw to a halt even when it’s going at normal speed.

Pedestrians don’t always cross at pedestrian crossings, especially in the commercial districts. Watch out for them in the middle of the road, as well, as they try to dodge cars.

The Brazilian traffic is also plagued with insufficient signs. You may follow the signs for a while and everything works out fine, until they disappear all of a sudden and you’ll have to stop and ask for directions. Buy a map once you arrive in Brazil. It can be useful when you try to get directions from someone who is not speaking English.

When it comes to parking, you need to be quite an expert in parallel parking on narrow streets while the traffic is waiting for you. It’s better to park further from your destination and walk.