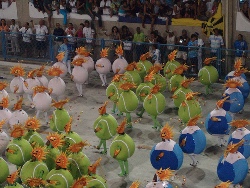 The Carnaval, celebrated as a profane event, seems to have the roots in the pagan Saturnalia and symbolizes the moment when the Christians bid farewell to the pleasures of the flesh. During Lent, Roman Catholics are supposed to abstain from the pleasures of the body which includes eating any animal product and other “pleasurable” activities.

The most popular place to experience the Carnaval has always been Rio de Janeiro. The modern Carnaval has its roots here dating back to 1845 when the city’s bourgeoisie imported the practice of holding parties from Paris. It originally mimicked the European festival but gradually acquired elements from Native American and African Cultures.

The party lasts for about two weeks and is very well known for the samba schools that parade in the Sambadrome. During the Carnival parades also take place on the streets in almost every neighborhood but particularly in Centro and the South Zone. Some of the parades are very popular and attract thousands of tourists.

If you want to experience the genuine feeling of a samba school, show up in the months before the Carnaval when the schools practice during the night. Salgueiro and Mangueira schools are pretty good choices and are located quite close to the tourist areas. A good cab driver will be able to take you there and it’s always worth it to ask around at the hotel you are staying.

The arena is huge so you should get a map before attempting to get to the sector where you’ve got tickets. All sectors are reachable easily by taxi or subway, while the odd number sectors (that’s 1, 3, etc) can also be reached by bus. 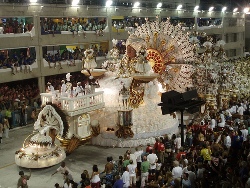 Rules are pretty drastic so make sure not to take any bottles, glasses, bags, cutting objects, firecrackers and fireworks with you since these are strictly forbidden. You can take at most two 500 ml plastic containers. Don’t worry about eating as there are fast food kiosks at every sector.

It is advisable to buy the tickets well in advance. For example, in June 2008 you can already buy the tickets for the Carnaval in February 2009. If you buy the tickets early you will most likely get a discount, which is great, because tickets can be very expensive. Depending on where the seat is located you can pay from US$3199 in the VIP boxes (which include bar, buffet, drinks, TV, AC and many more) to US$99 in the Grand Stands in Sector 4.