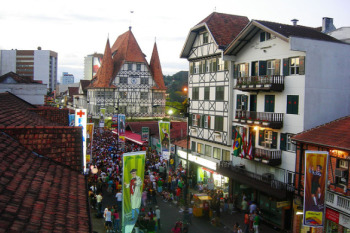 Most people don’t realize that Brazil has it’s very own Oktoberfest. After all, the very word conjures images of giant beer halls filled with people drinking German beer, eating German food, and dancing and singling to traditional German music. Brazil might be one of the last places you’d look for an Oktoberfest celebration. But the town of Blumenau isn’t your typical Brazilian town.

The 300,000 inhabitants are mostly descended from Germans who settled there in 1850. Many even still speak their native tongue. are proud of their German heritage and still speak the language of their ancestors that founded the city in 1850. Since 1984 the Blumenau Brazilian Oktoberfest has attracted an average of 700,000 visitors every year, making it the largest Brazilian festival behind Carnival in Rio. There are folklore shows, daily entertainment with parades and free beer food tents offering German specialties and  all kinds of music from Bavarian Oompah to Brazilian Samba. There’s a shooting competition and a pageant to elect the“Rainha da Oktoberfest” (Queen of Oktoberfest) and her two princesses who will represent Blumenau for the next year.

The town itself is a great alternative to Rio and a visit is an excellent way to see another side of life in Brazil. Out of the larger cities, you’ll also find that lodging is more affordable as well. So if you’re itching to see a unique slice of life in South America, or can’t make it to the more expensive Munich Oktoberfest, it’s not too late to book some flights to Brazil and enjoy Oktoberfest in the most unlikely of places – Brazil!