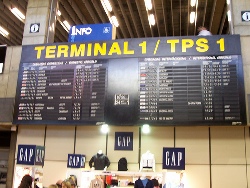 Galeão International Airport (GIG) in Rio de Janeiro is the airport where international flights land. There are direct flights from both Europe and North America, but not as many as those landing in Sao Paulo.

There are also flights from Asia hence Brazil is well connected to Tokyo, Nagoya and Osaka (Japan), and Seoul (Korea) as well.

Tips to get a cheap ticket to Brazil

If you fly from Europe, Africa, Asia or Australia it can get rather costly because of the distance. Hence it’s advisable to plan ahead and try different alternatives. Figure out which airlines have hubs in the Brazilian cities and try to use those airlines as prices will be much cheaper. Also consider every possibility and don’t be limited to a certain city. You can easily grab a domestic flight once you get to Brazil to get to your vacation destination.

Try to fly outside the high tourist season. A good idea is to take advantage of the shoulder season when the weather is still good but the prices are lower. Also check the special offer from different airlines.

It’s also a good idea to fly mid-week as opposed to during the weekend. Weekends are always crowded and flights more expensive while Mondays are filled with business travelers.