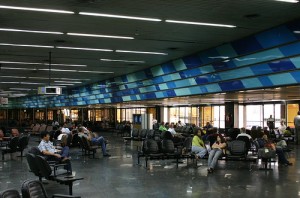 Rio de Janeiro’s international airport is used by millions of tourist each year. The city is particularly known for the Carnaval but also entices tourists with its beach, soccer and lifestyle.

The international airport ranks fifth in South America and second in the country in terms of passenger traffic. But finding cheap flights to Rio de Janeiro can prove to be a bit tricky unless you take a domestic flight.

The city’s international airport is called Rio de Janeiro/Galeão – Antonio Carlos Jobim International Airport (GIG) , most often known simply as Galeão International Airport. It is located 20 km from the city center. While sometimes the customs procedures can be easy and fast be prepared to wait (Brazilians are known to carry quite a lot of luggage).

The second airport serving Rio de Janeiro is Santos Dumont Airport (SDU) which receives only domestic flights, particularly from Sao Paulo. It is located right near the city center.

Some of the most important airlines serving the city include:

How to save on flights to Rio de Janeiro

Another idea is to try to travel during the low season. If you want to save money on flight to Rio de Janeiro avoid the Carnaval season at all costs. The low season lasts from May until October but you will risk having some low temperature days (“low” being 20C/70F). As for the rain, it’s so unpredictable that you can risk some even during the high season.