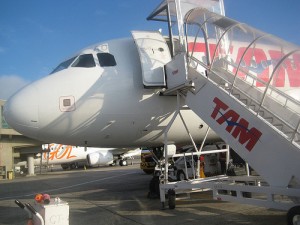 Sao Paulo is the largest city in Brazil, offering visitors an intense cultural experience and a very lively nightlife. It is one of the most diverse cities in South America and also the richest city in the area. Although such a large city, it is often ignored by tourists who prefer to head to Rio de Janeiro for the beach experience.

But with two international airports ranking among the top three airports in South America, finding cheap flights to Sao Paulo is not hard at all.

Guarulhos International Airport (GRU) is a hub in South America and Brazil’s busiest airport. It is located 25 km (15 mi) from Downtown Sao Paulo. It is hub for Gol Transportes Aéreos and TAM Airlines.

Congonhas Airport (CGH) ranks third in terms of passenger traffic in South America and is one of the three international airports serving Sao Paulo. It is located 15 km (8 mi) from the city center. It only receives domestic flights.

Viracopos International (CPQ or VCP) is a hub for Azul and it can be a good option to land on depending on where you fly from. It is located far from the city center (99 km / 62 mi).

Some of the most important airlines serving Sao Paulo include:

How to save on flights to Sao Paulo

Most often it is cheaper to fly into Sao Paulo’s Guarulhos International Airport than into any other airport in Brazil. If you happened to find a discounted deal into Rio de Janeiro or Brasilia you can choose that flight and then book a domestic flight into Sao Paulo.

You can save money on flights to Sao Paulo if you choose to travel during the low season. But the weather can end up being quite cold from June to September, leaving the shoulder seasons as best time to travel while still saving money on flights.