Getting from Rio de Janeiro to Buenos Aires (and return) 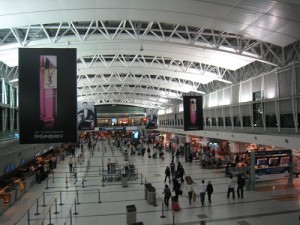 Rio de Janeiro is an iconic Brazilian city, famous for the colorful Carnaval, samba , football (soccer) and beaches. Tourists flock here to enjoy the music, the food and have fun.

Buenos Aires is Argentina’s capital , famous for tango and shopping. It has a unique atmosphere which cannot be compared to any other city in South America.

Traveling by bus is cheaper than flying but you’ll be on the road for at least 40 hours. A connecting flight is cheaper but you’ll be traveling for 9 hours. Ultimately, it’s your budget and vacation time which dictates the means of transport to use.

Rio de Janeiro is the biggest transportation hub in Brazil. The international flights arrive/depart on Galeão International Airport (GIG) . Flights to Buenos Aires are run by Aerolineas Argentinas , Gol Transportes Aéreos, TAM Airlines. Most of them land on Ezeiza International Airport (EZE). Single adult fares start at US$261 on Pluna (indirect flight, which means the travel time is over 9 h). Non stop flights start at US$332 per person, one way on Gol Airlines. The direct flight takes 3 h 30 min.

There are two bus companies which run direct buses between Rio de Janeiro and Buenos Aires:

Buses depart from Terminal Retiro in Buenos Aires , the main bus station in the center of the city.

The driving distance between the two cities is 2638 km so renting a car and driving is not exactly a good idea. You can break the 1 day 7 h journey into several segments and plan to stop over night along the way , though. Make sure to ask the rental company if you can take the car in Argentina. And also, consider that you’ll be driving on toll roads.