Getting from Sao Paulo to Rio de Janeiro (and return) 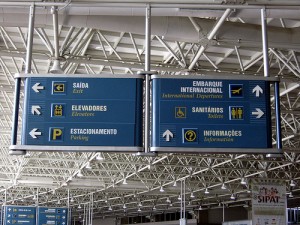 Sao Paulo is Brazil’s largest city and also the most underrated. It stands in the shadow of Rio de Janeiro but it has it fair share of interesting things to do and see.

Rio de Janeiro is famous for the Carnaval, samba , football (soccer) and beaches. Tourists come here to enjoy the music, the food and have fun.

If you are in a hurry, then a flight from Sao Paulo’s Guarulhos International Airport (GRU) into Rio de Janeiro Santos Dumont Airport (SDU) on Avianca is your best bet. But remember that you have to book it on the airline’s website. Otherwise, you can take the bus and you’ll be traveling for 6 h and pay slightly less.

Guarulhos International Airport (GRU) is hub for Gol Airlines and TAM Airlines. Flights to Rio are run by Avianca, Gol, TAM and Webjet. Most of them fly on Rio’s secondary airport, Santos Dumont Airport (SDU). Avianca runs a direct flight between the two airports, but you cannot book it via the major booking engines. You have to use the Avianca website . The flight time is 1 h and the single adult fare starts at US$60.

Congonhas Airport (CGH) is another important airport in Brazil, hub for Avianca Brazil, Gol Airlines and TAM Airlines. Flights to Rio are run by Avianca, Gol, TAM and WebJet. There are flights into both Airports serving Rio de Janeiro. Single adult fares to SDU start at US$195 , while return flights start at US$308 on TAM. The flight time is 50 min (direct flight). Single adult fares to Galeão International Airport (GIG) start at $170, while return fares start at US$205 on TAM. These are also direct flights (1h flight time).

There is a plan to build a high speed rail track between Sao Paulo and Rio de Janeiro. It should be operational by 2014 (for the FIFA World Cup) but the project is not exactly moving fast. It’s expected for the trains to be in service in 2016.

Auto Viacao 1001 runs direct buses between Sao Paulo and Rio de Janeiro. The only problem is that although the home page is in English, when you click on Schedules and Fares or when you want to buy a ticket, everything is in Portuguese.

On travel forums, you can find that the travel time between the two cities is 6 h by bus and the single adult “executivo” class fare is US$44 (since we couldn’t get any schedules or fares from the official website, consider the price as a starting point to create your budget).

Everybody knows that renting a car and driving in Brazil is not exactly for everyone. But as long as you drive during the day and pay attention, you should be fine. The shortest route between the two cities is 440 km and you should be able to cover it in little over 5 h. Do pay attention that you’ll be driving on toll roads.