Is a vacation in Rio in October a good idea? 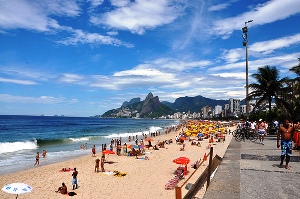 I’ve been stumbling over plenty of Rio deals lately and it certainly made me wonder if a vacation in Rio in October is a good idea. It certainly sounds like it when you look at the current deals for flights to Brazil , but what else is there to think of?

Rio de Janeiro is blessed with tropical weather, which means the summers (December to March) are hot and humid, while the winters (June to September) are pleasant and temperate. October and November fall in between the seasons and the weather can be either hot with the occasional showers or pleasant.

The average high temperature in October in Rio is 84F/28C, while the average low is 68F/20C. On average, October is not a very rainy month (it rains more in December but less in July and August).

>>more information about the climate in Brazil

Finding a cheap air ticket to Brazil can be challenging. If you look at the map you might be tempted to think that the routes are direct, but, in reality, you’ll most likely need to go through hubs such as Sao Paulo or Brasilia. So the airfare to Rio might be quite expensive, unless you manage to find a good deal.

Last minute offers start from $659 for a round trip flight from either Seattle or Chicago to Rio de Janeiro (departure: Oct 13; return: Oct 20).

The cheapest bed rates can be found in Rio de Janeiro hostels . Do remember though that the hostels are not just for the young backpackers. Many hostels have private rooms which are excellent for couples and even families. Private rooms prices start at $45 per night.

If you do prefer a hotel, during October the prices are lower than during the summer (December to March) so you will be able to find rooms in 4-star hotels from US$135 per night. A room in a 3-star hotel starts at $71 and you’ll be staying close to the Copacabana beach.

Other things to consider

While there are no fascinating festivals and events during October in Rio de Janeiro, it doesn’t mean you won’t find quite a lot of things to do (besides sightseeing, spending time on the beach, and checking out the nightlife).

If you are a soccer fan, then make sure not to miss the chance to see a match at the Maracana Stadium. If you don’t like to book the ticket on your own, there is always the possibility to book it online (and they will even pick you up from the hotel).

A good idea for an interesting day out is to take a tour of the Tijuca Rain Forest. Jeep tours typically last 4 hours and the prices start at US$58 per person and include an hour hike in the forest.