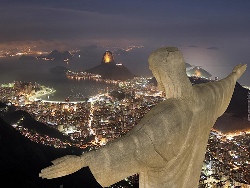 Famous for the Carnaval, samba and the romantic beaches of Copacabana and Ipanema, Rio de Janeiro draws tourists like a magnet all year round. Other important landmarks include the giant statue of Jesus on top of Corcovado mountain and Maracana stadium, one of the largest football (soccer) stadiums in the world.

Rio de Janeiro is Brazil’s second largest city and stands on the coast of South Atlantic. It’s located at 1160 km/725 miles from the capital, Brasilia.

How to get to Rio de Janeiro

Galeão International Airport (GIG) is the airport where all international and most domestic flights land. The airport stands at about 20 km from the city center.

Santos Dumont Airport (SDU) is the domestic airport, receiving flights from Sao Paulo and other domestic destinations. The airport is located right in the city center.

Rio de Janeiro has a tropical climate with temperatures reaching over 30C/86F every single month. In the major tourist places, however, the temperatures are cooled down by breeze. The temperatures don’t vary much from month to month, reaching an average low of 20C/69F and an average high of 30C/86F.

Aside from the Carnaval, the beaches are among the top things to do when visiting Rio. Copacabana is international famous. Other oceanic beaches include Arpoador, Ipanema , Leblon, São Conrado, Barra da Tijuca, Recreio dos Bandeirantes and Grumari.

Although bathing topless is not common, you’ll see that most of the girls- and may I say gorgeous ones – wear tiny bathing suits which don’t seem to hide much. Just remember not to stare!

If you plan to also do some sightseeing, go on top of Corcovado not only to see the giant Jesus statue but also for the most magnificent views in the town.

Sugar Loaf mountains are also worth to check out. There is a cable car which runs up the mountain and you can take the bus to get to the base station.

Head to the Lagoa Rodrigo de Freitas, which is a lagoon popular among skaters and joggers and which offers some of the best views of the Ipanema beach.

If you are a football (soccer) fan, don’t miss visiting Maracanã, one of the largest football stadiums in the world.

Rio is also filled with a lot of important buildings:

There are several parks in Rio where you can enjoy the nature and relax: Jardim Botânico, Parque do Flamengo and Parque Nacional da Serra dos Órgãos are just three of them.