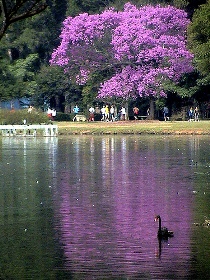 Sao Paulo is one of the most underrated cities tourism wise. Unfortunately, it stands in the shadow of Rio de Janeiro and other important beach destinations in the country. A very diverse city, it offers great restaurants, glamorous clubs and interesting sights to visit.

Sao Paulo is the largest in Brazil and in the entire South America. It’s located in the south east part of Brazil.

How to get to Sao Paulo

Guarulhos International Airport (GRU) stands at 40 km from the city center and is the most important airport for international flights. It’s served by domestic airlines but also by US airlines – United, Delta, American, Continental – , Air Canada and European Airlines – Air France, British Airways, TAP, Iberia, Alitalia, KLM – and many others.

Sao Paulo is blessed with humid subtropical climate. Temperatures don’t get too hot, seldom reaching 30C/86F during the summer. The warmer months are wet but July and August are dry. August, which is considered “winter” has seen some dry and hot spells over the past years. Lower temperatures might be experiences in January. However, temperatures don’t vary much during the year, reaching an average low of 15.5C/60F and average high of 23.5C/74F.

Unfortunately Sao Paulo is not exactly a walker paradise so be careful every time you need to cross the road. If you still want to be active, you can ride a bike either in one of its parks or on the cycle ways (which exist but are not exactly used).

The old historical center can be tackled on foot. You can spend couple of hour exploring the Centro and here’s a list of the most important buildings to check out:

There are also plenty of museums and galleries to visit. Temples and churches complete the city’s cultural and religious profile.

The parks offer a nice break from the city’s hustle and bustle. You can relax in Ibirapuera Park (see photo), which has path both for walking and jogging as well as cycle ways. It’s one of the most visited leisure areas in Sao Paulo. Parque Estadual da Cantareira is famous for the trails in the woods and the monkeys which inhabit them. Parque Villa Lobos is a great choice if you want to bike or play tennis (you can play for free on the tennis courts).