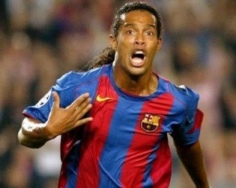 Football (soccer) is the most popular and almost only sport practiced in Brazil. Although soccer’s birth country is England, no country in the world plays it better than Brazil. The Brazilian national team is the most successful in FIFA World Cup’s history and hence ranks number one in the world.

The greatest soccer players in the world were Brazilian, one of the most beautiful stadiums is Maracana and the Brazilian fans are the most fanatical. Soccer is more than just 11 team mates looking to win, it’s a religion which starts when a boy is able to walk and continue through childhood. Kids and teens play football (soccer) on every street corner in all cities and villages.

The most prestigious cup in South America is Liberator’s Cup, similar to the European Cup (nick-named Euro cup) on the old continent. Brazilians don’t particularly care about Liberator’s Cup hence the cup is usually won by Argentina.

Soccer was brought to Brazil by European and Dutch sailors in the second half of the 19th century. They used to play it on the beaches of the North-eastern coast. The first official soccer match was played in 1894 in Sao Paulo and was an immediate hit.

Any soccer fan will know at least one of the following Brazilian players: 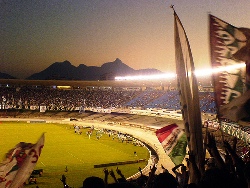 Maracana (see photo left) in Rio de Janeiro is, without a doubt, one of the world’s greatest football stadiums. The stadium was built in the 1950 for the fourth World Cup and is capable of housing 95,000 spectators. It was the playground of famous football players, such as Ronaldo, Pele, Rivaldo, Santos and the list can go on. The teams calling Maracana their home stadium are Flamengo, Fluminense and Vasco da Gama.

Estádio do Morumbi, or just Morumbi, in Sao Paulo is smaller than the world famous Maracana but is capable of housing 80,000 fans but for security reasons only 75,000 tickets are sold for each match. It’s home stadium for São Paulo Futebol Clube.

You can find information about tickets and matches off the clubs’ official webpages. Careful though, the pages are in Portuguese and only some have an English version!