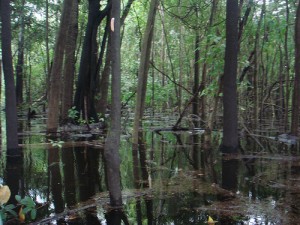 Just like other countries in the Southern Hemisphere, seasons in Brazil are the reserve of those in Europe and the United States:

However, this pattern is only applicable to Southern Brazil. Most of the country’s territory follows a two seasons pattern: a rainy season (the summer) and a non-rainy one (the winter).

Brasilia’s temperatures hardly reach extremes. I can get as low as 1C in winter and as high as 34 in September/October. During the dry season (August and September), the landscape becomes desert-like. But the city is blessed with some of the most beautiful sunsets during this time of the year. The best times to visit the city are: May and June.

Rio de Janeiro has a tropical savanna climate, with a long wet season lasting from December to March. Temperatures above 40C are common during summer, while temperatures around 28C are normal during any month of the year. Due to its location, during autumn and winter the city is often reached by cold air from Antarctica, which results in frequent weather changes. Average yearly temperatures are between 21C (low) and 27C (high). The high season is during summer but if you want to save money, visit the city during the low season (May to October) is a very good option.

Sao Paulo has a monsoon-influenced humid tropical climate. In the summer, the high temperature can reach 32C, while in winter in can be as low as 6C. The average temperatures are similar to those in Sydney and Los Angeles. Because of the elevation, the city has a distinct temperate climate.

Such a large country as Brazil is divided into a multitude of climate zones, which vary a lot from the mostly tropical North to the temperate zones below the Tropic of Capricorn. In total, there are six climatic regions in Brazil: tropical rainforest, tropical wet and dry, tropical monsoon, semiarid, humid subtropical and subtropical highland.

In this area the rainy season lasts between December and March. During this time of the year, the temperatures are high and Pantanal gets flooded because of the rainfall. Avoid visiting the area especially in January and February.

Salvador and Recife, as well as the resorts near the towns, have balmy temperatures year-round. They are rarely under 25C and they don’t go over 32-33C often either. Winter temperatures aren’t very low either (just 2-3C under the summer ones mentioned earlier). The rainy season begins in April and lasts until June. But showers don’t last long and are followed by sunshine. Sun bathing is possible year-round.

The south part of the country has a more conventional four-season climate. The winters are mild (10-15C) and the summers are hot (24-27C). The best time to visit this area, especially if you want to head to the near-by beaches is summer (December to March). If you want to visit other highlights (such as Iguacu Falls), you can plan the vacation during the shoulder seasons as well.